Match the Man to the Moment 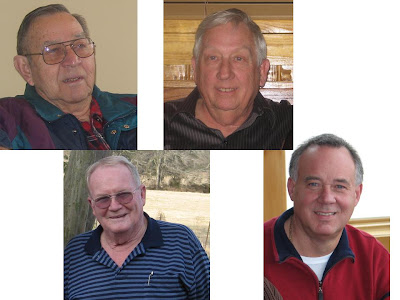 Some of you are aware that Roger and I did the Grand Family Tour in February. It was a great trip covering almost 800 miles. I'll post more pictures later. In the interim, I thought I'd pass along some moments that were shared with us featuring the men above. Clockwise from upper left, Roger's dad "Don", my step-dad "Ray", my dad "Tommy" and of course, Roger.

Please feel free to match the moments below to the man above.

a) This fella has 2 similar moments and I'll share them both. Who decided the rooftop of his house was a good place to lay back and rest - UNTIL the vultures started circling. Then, who decided when repairing a sprinkler head that since he was on the ground anyway, that the middle of the yard was a good place to take a nap, only to be awoken by the neighbor and EMTs who thought, well, lets just say he got a free ride to the local Emergency Room.

b) This fella has decided that should he ever experience a pharmaceutically induced erection that lasts longer than 4 hours, rather than call the doctor as recommended by the pharmaceutical company, would instead call his neighbor into action.

c) This fella, alone on a Saturday night, as his wife was out with a girlfriend, invited a door-to-door Kirby Vacuum cleaner salesman into his house. While the salesman demonstrated/steam-cleaned the entire living room, this particular fella sat in his easy chair eating pizza, watching TV and lifting his feet when necessary so as not to impede the demonstration. 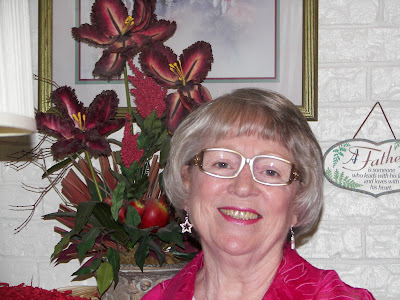 Roger and I had the chance to get to Fort Worth to celebrate Momma's 70th birthday. Doesn't she look great!?! She's living proof that like her birthday card says, "70 isn't what it used it to be!" 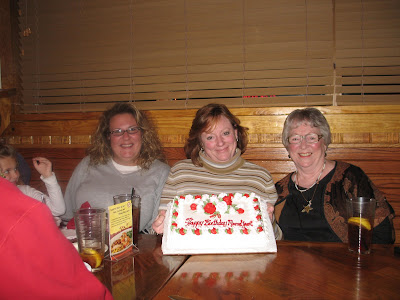 We descended upon the Outback Steakhouse in Burleson for her birthday dinner, which was also shared with Melissa (the 19th), Me (the 16th) and Loretta, also on the 19th. It was a great time and I'm almost sure the management of the Outback will not allow us all back under their roof at the same time ever again. There may have been, but I'm not completely sure, some crawling under tables a time or two, or three, during the evening. 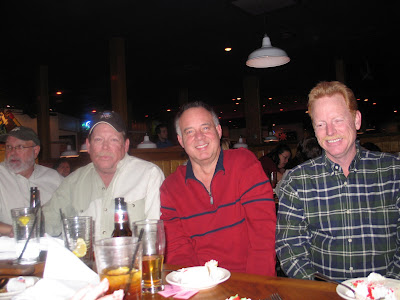 The boys above are Marty (in-law to Dave), Dave (my big brother), Roger and Bryan (my little brother). 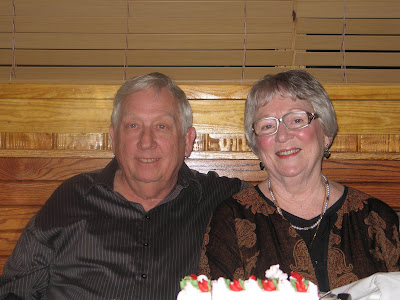 Ray was brave enough to foot the bill for the entire crew. Of course, had I known that, I would have ordered a better brand of tequila and a bigger and better cut of steak! 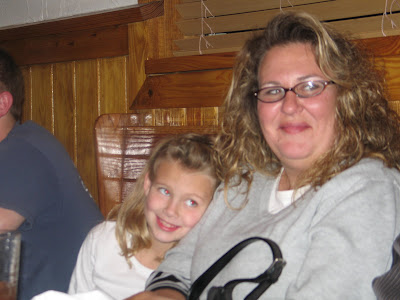 Seven-year-old Aubrey, who managed to keep herself entertained amongst the crazy adults, gave everyone drawings of hearts. Mine had a snowflake in the middle! 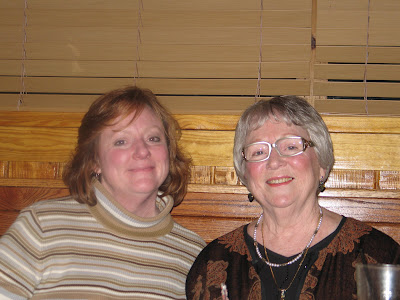 In the end, everyone had a grand time, with lots of laughter and lots of getting to know each other again. Like with so many families that scatter from here and there, the opportunities to all gather together become more rare, but this makes each holiday or birthday even more special!

The Letter "R", or the letter "R-uh"
No photo to share this time, just a quick lesson on how to speak like a New Englander. Please note, this only applies to those who live east of the Connecticut River, south of Lake Winnepesauke and, I hate to say this, but those who most likely have not gone to college. Nothing personal, but it's very true.

You can also pretty much exclude most Mainers, as they have a whole 'nother issue going on up there. Or, as they call it "Down East". What in the world does that even mean? Seriously! But I digress.

There are actually 2 simple rules.

Rule #1: this rule is the worst kept secret in the entire world. If a word has the letter "R" anywhere near the end, do not, under any circumstance, pronounce the "r".

As you can see, sometimes it's quite necessary to turn a one syllable word into two syllables to follow this rule.

Rule #2: this rule is rather simple, and seems to be the New Englander's way of making up for all those lost "r"s. If a word ends with a vowel, or a silent consonant, add an "r" to the end. Simple enough!

Example: I hate wearing a brawr but I'll put one on anyway.
You've reached the lawr firm of Diddle and Doodle.

I once told a waitress, as a joke I might add between Roger and myself, "thank you for the "strawr". This got me into all kinds of trouble with that woman! You see, she had gone to college and was quite offended that perhaps I was insinuating that she was mispronouncing her words. Geewhilakers - it was only a joke that she wasn't even supposed to hea-yuh!

Rule #2a: Here's where it gets complicated. If a syllable ends in a vowel or silent consonant, throw in an "r".

Okay, I know, drawer is only pronounced with one syllable, but again, sometimes you just have to make it into two so you can follow the rule.

I'll provide more examples later as I have to make note of them when I hea-yuh them. In the meantime, class is ovah.
Posted by Roger & Janet at 10:54 PM No comments: 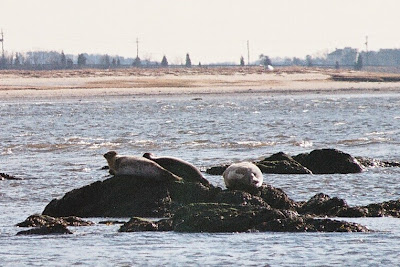 The wind is blowing up to 25mph, a muted sun is trying to peak through, the temperature is only in the mid-30's. So, what is there to do on a Saturday such as this? Go to the movies, head to the shopping mall, or head off to a cozy bar? Of course not! Do as the seals do and go to the beach! These seals are hanging out on Badger Rocks where the Merrimac River (more on the Merrimac in a later post) feeds into the Atlantic Ocean. With water temperatures at 39 degrees, that's actually warmer than the air.

Roger and I weren't the only ones to head to the beach. Take a look! My favorite picture is of the little boy toddling on the beach. Later he was trying to get back to his parents who were looking for treasures around the lobsta' traps, but the wind kept blowing him backwards. She finally noticed and ran over and rescued him! By the way, he was never in peril. 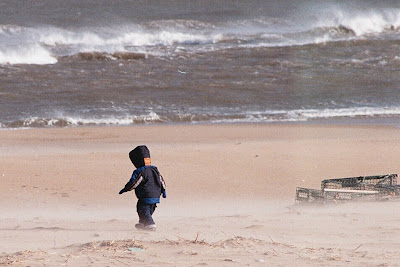 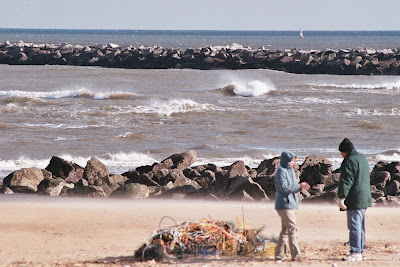 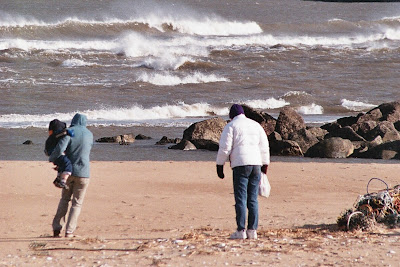 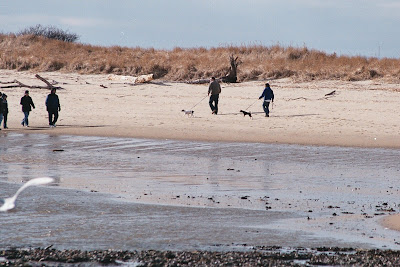 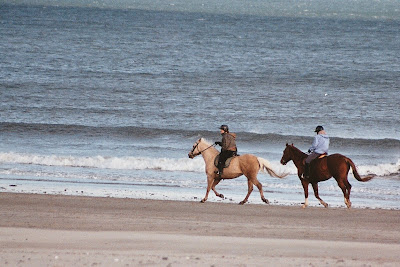 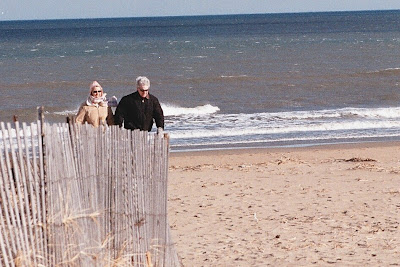 After taking these photos, Roger and I headed up the coastline to Portsmouth, New Hampshire where we noticed the Coast Guard patrolling the shores. 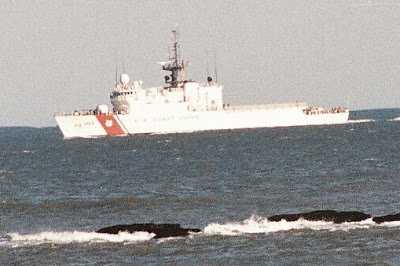 After doing a bit of shopping in historic downtown Portsmouth, we did indeed head to a cozy bar to warm our cockles!
Posted by Roger & Janet at 10:28 AM No comments: