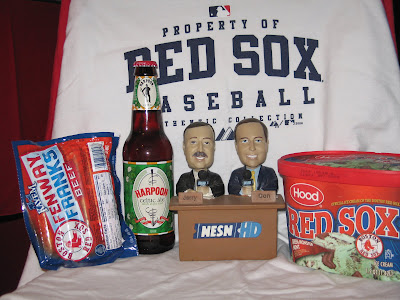 From our first meeting, Roger and I have always enjoyed going to baseball games. Early on it was the Texas Rangers. This was before the beautiful "Ballpark in Arlington" was built. The old stadium was like an erector set that just happened to play host to a major league baseball team. Historic Fenway Park on the otherhand may not be much to look at either, but as true fans know, the beauty lies in its history and layout.

I'm proud to say that my own grandfather sat in one of those seats in the 1950's. His oldest daughter, Juanita, up and married a Bostonian, so one summer the rest of the family packed up the sedan and drove from Amarillo all the way to Boston to visit her and the new in-laws. Papaw, who was once a recruited ballplayer himself, had to have been thrilled to catch a game at Fenway Park. It's hard to imagine that at the time, the park was already 50+ years old. He'd be amazed to know that it still stands in its original configuration and still has a manually operated scoreboard. He'd be even more amazed that the Redsox went 86 years between World Series titles. Supposedly the lack of a title was a result of a curse brought on by trading Babe Ruth to the "evil empire".

Other baseball memories include the summer of 1977 when I worked as an usher for the Texas Rangers. We wore gauchos, gingham shirts and a cowgirl hats. During this time, Roger was in Lawrence, Kansas cheering on George Brett and the KC Royals.

Tickets to Redsox games are very hard to come by, not to mention over-the-top expensive, so we enjoy the games from the comfort of our living room. To quench our appetite for the "real thing", we began going to see the New Hampshire Fisher Cats, one of the many MLB farm teams in the area. There's just something about a game of baseball. The easy, steady pace, with the sudden pop of a flyball, or better yet, a homerun to regain the crowd's attention and cheers.

Here's an excellent link if you'd like to read more about the history of Fenway Park.
Posted by Roger & Janet at 5:24 PM 1 comment: