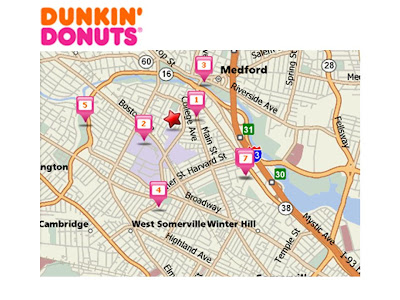 June 5th is National Donut Day and we couldn't live in a better part of the country to celebrate. New Englanders are mad for their Dunkin Donuts. The map above shows the locations near my office. SEVEN all within ONE mile.

However, its not about the donuts for these folks, its about the coffee. Winter, Spring, Summer, Fall, morning, noon and night. I've never seen anything like it before and it comes with its own lingo when ordering. I'm not talking about the fancy foreign language terms used by Starbucks. At Dunks' it's more like a loud-mouthed waitress yelling an order to the short order cook working in the back of a greasy spoon. Only the loud-mouthed waitress is instead a customer.

Back to map, if you're wondering where #6 is, its hiding behind #7. The two stores are located across the street from each other.

As an aside, this is actually the first I've heard of National Donut Day, but apparently the Donut/Doughnut is honored the first Friday of every June.
Posted by Roger & Janet at 12:13 PM 2 comments: