Should Have Gone to Quebec!

Way back in 2009 I had plans to meet Susan and Sylvia in Quebec City, Quebec.  Being so close to the Canadian border I was really looking forward to the road trip. Right prior to this trip, I had the chance to tag along with Roger on a business trip to Chicago. We were in Chicago for three nights and all was going swimmingly well.  Until, and I do say, until, my hormones kicked in, the result of a hysterectomy 6 months earlier.

To avoid taking HRT I did research and found a drug that relieved the wicked bad hot flashes and mellowed out the crazy train that resulted from a complete hysterectomy.  (Google "complete hysterectomy/horror stories" and you should find my picture. Yeah, it isn't pretty.) I had taken the drug only once or twice before this time and could really tell I needed to get things into check. This is one of those medications that 100% must be "taken as directed". Long 3rd-night-in-Chicago story short, our final night, I was a complete mess. Because of this I was utterly exhausted and backed out on my road trip to Quebec.

Don't worry, all the embarrassing personal moments were in the paragraphs above.

So now I found myself at home with a couple of days off and itching to go somewhere, and while Quebec City seemed a life-time away, as in 6 hours, I chose instead to go to Stowe, Vermont, by my lonesome, less than 4 hours away.

Off in my new Wrangler I went! What a stunning drive!  Up I-93 through the White Mountains I headed north, then angled west and cruised back south into Stowe where the Green Mountains begin. Stowe is a big-time skiers destination, but in August, it's rather tranquil and very scenic. I arrived at the Green Mountain Inn, checked in, and found my room tucked away on the 2nd floor near the back of the inn.

The first night I went to dinner nearby, then headed back to the inn.  As it was still a bit early, and my room was quaint (super-tiny) I decided to go to the quaint (super-tiny) restaurant/bar in the inn. Initially I chose a small table for two, and while waiting for a waiter, I noticed a couple standing at the bar with only one available seat. So I offered up my table and we swapped spots.

Here's where the trouble slowly eeked itself out. To my left was an older, seemingly innocuous, man. Above his head was the Redsox game, so I was continually looking his direction watching the game. A friendly conversation struck up and before long I gave him a business card with the website of this blog.  The card also contained my cell phone number and email address.  I had also shared with him that I lived in Massachusetts and drove a Wrangler and that I worked at Tufts.

It was becoming apparent that this gentleman had grander aspirations than a chat at the bar as he offered to pay for my beer, which I declined.  He stepped away to the restroom and I quickly paid my tab. Upon his return he offered to "see me to my room", which I then told him I chose my room in the safe confines of the inn to avoid being out at night time, so no escort was necessary, but thank you very much, and off to my room I went, followed by the locking of every lock I could find and placement of a chair in front of the door.

I awoke to a stunning day.  Off in my Wrangler I went to explore.  Cruised by the ski trails, visited the Von Trapp Family lodge, yes, those Von Trapps from the "Sound of Music" and overall had a glorious time  I returned to my room around 4:00. Then, my cellphone rang.

I didn't recognize the number, so I didn't answer, but a message was left, from my wanna-be-paramour from the previous evening. He wanted to meet me AFTER dinner for drinks. I dropped the phone like a hot potato! Then, my cellphone rang again, from a differnt number.  Again, a message was left, from the same man.  At this point I'm 100% spooked. So here it is 4:30 in the afternoon so I head down to the restaurant to see if I can get room service later in the evening.  Because of the small setup they couldn't accommodate me. Then, I started crying, telling the bartender who was young enough to be my son about the older man from the night before and his phone calls. The bartender was VERY sympathetic, however, his hands were tied.  So off I go to find an early-bird dinner so I could be back in my room well before dark.

After my meal I stopped at a convenience store and loaded up with wine, cheese, crackers and nuts to take back to the room, as I knew I was going to have many hours ahead of me holed up in my room on what was an otherwise beautiful evening. Back at the inn I settled in for my evening which ended up consisting of watching Ted Kennedy's wake on C-SPAN and the Miss America Pageant on another channel (worse cable channels in the history of hotels) alternating crying and laughing.  During this, Roger called, which I simply told him I was in for evening and enjoying my quaint (super-tiny, becoming hellish) room!

On a final note, no more phone calls were received on my cell, but sure as heck there was a voice-mail on my work phone when I returned on Monday.  Lesson learned!
Posted by Roger & Janet at 9:22 PM No comments:

Today I had my light bulb moment when I stumbled across Richard Cohen's blog. Richard is married to Meredith Vieira and was diagnosed ages ago with Multiple Sclerosis. And now, thanks to this post, "Importance of Staying Stubborn", I have a much better understanding of Roger.  Though we aren't faced with M/S, Roger does have issues that can affect his mobility. And thanks to Richard's post, I fully get Roger's "stubborness".  (Is that a word?!?!)   Either way, I ask that you please read Richard's post before continuing on with my entry.

Awesome, thank for obliging me and now on to the purpose of my post.

Thanks to yet another ruptured disc (L1 this time), along with a very painful shoulder, Roger has been struggling in putting on his socks and shoes in the morning. This is actually nothing new, just currently made even more difficult at the moment due to very real injuries.

In my effort to help him out a bit, I found the aides (a nifty device to help you put on your socks and a super long shoe-horn) provided to him following his hip replacement and set them beside his shoes.  I had been encouraging him, as in nagging, to get them out himself, but when he didn't, I assumed he was simply forgetful. After a few days I told him I was happy that he was using the tools and noted how much easier it is to now accomplish what was a very difficult and painful task.  His response..."but I feel like I'm giving in".

This statement was completely lost on me. If you need help, get it!  Clearly I'm a Democrat at heart, but I digress. I told him he wasn't giving in, that he has a ruptured disc for heaven's sake. I've seen him flat on the floor before and was doing what I could to avoid that from happening again.

Back to his question. "If this is how my body is now, what will it be like in 10 years?" Roger posed this question to me just the other night.

I've allowed my mind to wander in that direction as well a time or two, but mostly in the functional sense.  A future home should be a single story and have a walk-in shower.  I need to be sure he has access to the best doctors like he currently has. I need to have a job that provides him with excellent health insurance. As far as the actual life-style aspect of the future, I rarely allow myself to think that far ahead and instead focus on what his capabilities are at the moment.

In the end, my response to him, which is 98% true, is that his body is only slightly the worse for wear than it was 10 years earlier, much of this due to the natural aging process.  But we know with Roger it's more than that.

Many years ago he was diagnosed with degenerative disc and bone disease. What this means is that over the course of our 24 year marriage he's had 4 back surgeries, rotator cuff surgery, and a hip replacement. (He's also had major surgery on his colon, but that's another story). His lower back is marred with scar tissue and arthritis. Soon he will need to have the left shoulder repaired as he is in intense pain right now, and the other hip is inevitable, but far from a current pressing matter.

He's also had a nagging, sometimes screaming, wife yelling at him "to take it easy", "STOP THAT", "are you CRAZY"....on and on and on.

One thing I've known all along is that Roger's unwillingness to "give in" is what keeps his tired, arthritic body going. But more importantly, it's what keeps his spirit alive. He could have long ago just tossed in the towel, but he has absolutely refused. 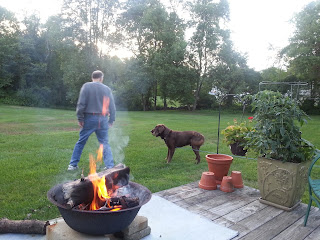 I truly wish I could thank Richard Cohen personally for the openness and raw honesty that he shares with his readers, but for now I know I'll honor him by backing off Roger and letting him do things his way.  I'll suggest alternatives from time to time, but it's ultimately up to him to make the decision.

So 10 years from now I foresee a 71-year-old guy that has been through a lot mentally and physically, but will also still be a force to deal with, staying well ahead of his 64-year-old wife.  Oh, and he'll still have that wicked-fast sense of humor that also keeps me on my toes!
Posted by Roger & Janet at 1:15 PM No comments: