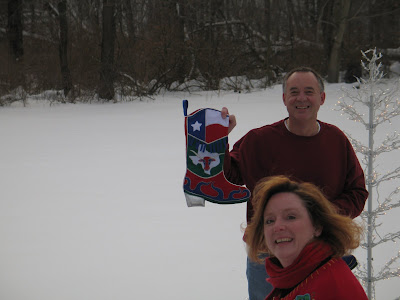 It's so hard to believe that this year will be our 8th Christmas here in New England. The time really has flown by! As you can see, we are pretty much guaranteed a White Christmas this year. Christmas is always a great time, but it feels so much different surrounded by 2 feet of snow. Very different from one of our last Christmas' in Texas when we threw on shorts and t-shirts and sat outside playing chess.

What Roger and I are most surprised about, is this will be our 18th Christmas together. Not that we thought we wouldn't last as a couple, as we truly are bestest friends, but that so much time has passed. Our first Christmas is still very vivid.

We were in a very small apartment and I really wanted a Christmas tree. One day I returned home to find a short, but very fat, tree squeezed into our living room. Roger was so proud, but very amazed at how much smaller the tree looked at the Christmas tree lot.

That 1st Christmas we drove to Lawrence, Kansas to see his family - this was my first trip to Kansas and I was so very nervous. The trip takes about 8 hours and we found ourselves rather late at night on Christmas Eve traveling through the state of rolling hills. Radio reception was spotty at best, but we finally a found a station we could hear. It was a lone DJ, no ads, just him, the Christmas music he was tasked with playing, and apparently a bottle booze by his turntable. The longer we listened, the slurrier his words became. We laughed so hard, which really eased my anxiety!

Other memories are of "Pa" Davis and his magical basket of nuts. When Nicole was little he would tease her into cracking open the nuts, knowing that several walnuts had been previously opened, carefully scooped out, and a dollar bill tightly folded and placed into the nut. He would then carefully glue the walnut back together. Of course, in later years, Nicole went straight for the mightly walnuts and got rather good at spotting the nuts that had been manipulated.

Most times Christmas seems to focus on the Christmas tree. The year we had moved into our 1st house in Richardson, we had a room where eventually a pool table would go, but this year we plopped our HUGE Christmas tree right smack dab in the middle of the room. It was fabulous!

Other years we've had to accomodate pets, with our latest trees being no taller than 4 feet, which we place on a perch built into, and beside, our rather massive fireplace. We did this after we got Guinness, knowing what damage his tail could do!

This is actually the first year we've gone without, as we've moved into a warmer part of the house and couldn't quite figure out where it would go. I'm sure we'll have this resolved by next year!

An explanation of the pictures. We decided to take a self-portrait last weekend by setting the timer on the camera. The top picture was taken when I heard the camera just about to go off before I made it to my spot. Running down 5 steps of slippery steps of one deck, through 10" of snow, and across another deck. The picture below was when I finally scampered across all obstacles - throwing caution to the snow banks! 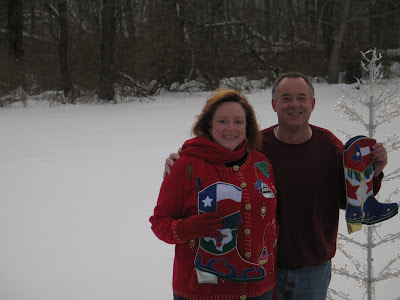