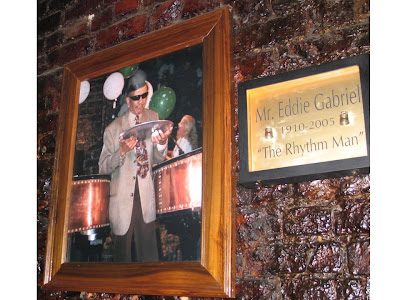 Recently I had the opportunity to spend a week in New Orleans to attend a conference. Naturally, I was unsure what to expect after Hurricane Katrina.

Reports state that the population of New Orleans is now only 50% of what it used to be. That, in itself if really hard to imagine, suddenly your own city or neighborhood reduced by half. But then add to that, all the lives that were lost.

I took the above photo at Pat O'Briens in the French Quarter, famed for the gazillion Hurricane drinks, and other libations, they serve every year. Okay, so I hear they also serve food, but I myself can't attest to that fact.

If you've ever gone to the piano bar, you would have seen Mr. Eddie perform. Using thimbles on his fingers, tapping away at a silver serving tray, working the crowd so patrons could toss coins and bills on the tray, making his "music" even livelier!

Sadly, he was lost in the floods, . A lifelong resident of NOLA, he began working at Pat O'Briens in the 40's. Rumor has it that he was never officially hired, he just showed up one day and began bussing tables. What is true, is that he never missed a day of work in his life. He worked until 3am every morning entertaining the tourists. In fact, he had worked the night prior to the hurricane and was too tired to try to evacuate. His wife was rescued from the roof of their home, and the last thing she remembered of her husband, was hearing him pray. It would be 4 months before his grandson was able to track down his body.

I was happy to find out that inspite of his tragic death, he received the send off he deserved - on what would have been his 96th birthday, a crowd gathered at Pat O'Briens where a jazz band led everyone in a second line jazz funeral and the celebration continued through the night.

From what I've found on the internet, Mr. Eddie was not a poor man. He had acquired homes and a couple of businesses over the years, but his main love was Pat O'Brien's. So much so, that the eve of his 2nd wedding, off to work he went.

Next time you're in New Orleans, stop in for a hurricane at Pat OBrien's as a way to pay homage to all the lives that were disrupted. Because in New Orleans, the party never stops and they wouldn't have it any other way!
Posted by Roger & Janet at 7:31 AM No comments: