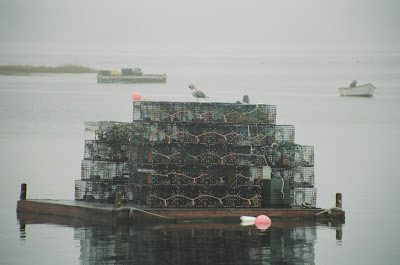 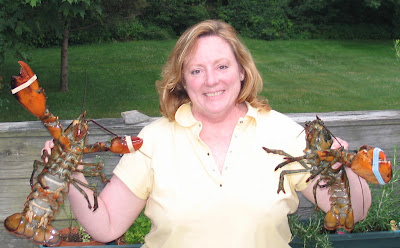 Summer in New England means lobster! Make that LOTS of lobster! These 2 critters were picked up in Kittery, Maine at the Seaview Lobster Company (a brief 30 minute drive from our house) for a very cheap price. By lobster standards that is.

When Roger and I moved up here, I seriously thought lobster could be bought for prices similar to chicken. But that’s not the case. Due to an abundant crop this year (over-sexed lobsters maybe?), the prices have dropped. These 2 beauts we bought at $7 a pound, and they usually would have been $11 a pound. But still, multiply that by their weight – 5 lbs total – that’s still quite the chunk of change out the pocket book.

Unfortunately, the guy who sold us our dinner, though as incredibly young and handsome as he is, with his mouth shut – is missing several teeth! So I feel it’s my duty as a New Englander to buy more lobsters so maybe this guy can afford to go to the dentist.

We’ve learned quite a bit about lobsters in the time we’ve been up here. One, you can go scuba diving for lobsters. We haven’t done this ourselves, but that’s how friends who own a boat have been known to spend their summers. Two, I can make a mean lobster chowder – southern style! Cajun spices and Tabasco make all the difference in the world.

Third, and most important, don’t even think you can just move to Maine and start up your own lobster business – you will not make it. Not because there aren’t enough lobsters per se, but unless you’re born into the business, or have had long-standing ties to a lobstering community – your traps will be sabotaged. That’s pretty much a guarantee.

Not to completely disparage Mainers, but I also read not long after moving here about a couple who moved north and started an orchard business. Seemed harmless enough to me, but for some reason the neighbors burned down the orchard – apparently because they weren’t locals and they had the nerve to try to start a business. These people not only refused to move, they also replanted their orchards. I hope they’re still there, but it’s certainly quite a hill to climb.

Overall though, our experiences with Maine have been very pleasant, though they are very much their own people, but then again, they know we’re spending our money in Maine, then heading back home to Massachusetts.
Posted by Roger & Janet at 9:56 AM

I'm jealous!! One of my goals in life is to get to Maine and have a lobster! Hopefully someday! Leah